A Short History of the Footnote | Lex Academic Blog 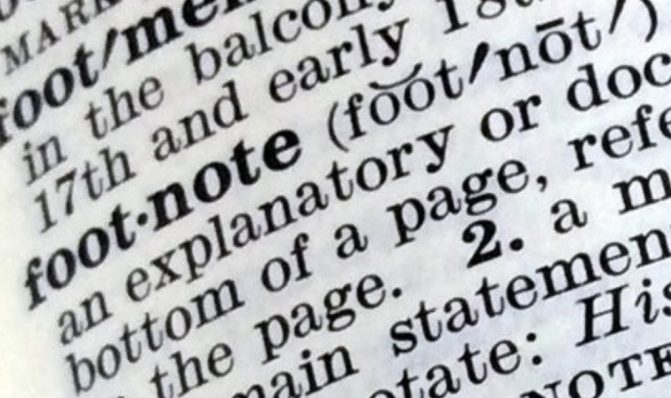 Towards the end of his career, the English Literature professor Thomas McFarland tried to persuade his publisher to release a book without footnotes. They make reading feel ‘like driving over a road with unnumerable potholes’[1], he complained, adding that he sees no need for them other than ‘to allow scholarly readers to purloin my citations without having to give me a reference’.[2]

Footnotes divide opinion. Anthony Grafton, author of The Footnote: A Curious History, mobilised an embarrassment of metaphors to combat such sentiments. Footnotes are sewers[3] and toilets[4], he says, safely organising and distributing scholarly waste. Or, if you prefer your metaphors entomological, they’re anthills,[5] swarming with otherwise unseen learning. Some have employed footnotes, he goes on, to interpret a ‘dangerous’ text, which like a ‘bomb’ is liable to ‘go off’ if handled ‘by ordinary people’.[6] Individual academic egos clash in footnotes, too, with them being a suitable place to settle scores; Grafton describes Alexander Pope’s use of footnotes as akin to how ‘the hockey-masked villain in an American horror film uses a chain saw: to dismember his opponents, leaving their gory limbs scattered across the landscape’.[7]

In the humanities, footnotes evolved as part the machinery of modern scholarship, a tool to reference and cite, comment and digress. To some, like Grafton, they can be a high art, injecting humanity into otherwise dry scholarship. To others, they are nothing but an outmoded device, needlessly slowing down reading, clogging up text with irrelevant information, and – as McFarland seems to have felt – a source for scholarly competitors to pilfer your sources.

The most fundamental aspect of a footnote is perhaps that it is written and read in a voice different from the main text. A scribe in the city of Deventer in the Netherlands, writing around 1420, gives a lovely example of how this second voice might be used. After a long day hunched over his manuscript, he retired, leaving his book open ready for the next day. But when morning came and the scribe hovered his nib over the paper, he found it was damp. During the night, a tomcat had tried to claim the book as his territory – a fact that has come down to us thanks to the scholar, who explained the unsightly mark in the margin: ‘Cursed be the pesty cat that urinated over this book during the night […] beware well not to leave open books at night where cats can come’[8].

The scribbled explanation of this wretched Deventer scribe was not, strictly speaking, a footnote. It was a margin note. And, more usually, marginalia would consist of commentary, explanation, references, expansion or arguments about the text itself. The margins of Bibles seem to have been particularly lively scholarly battlefields, with annotations and citations ‘lobbed’, as historian Chuck Zerby put it, by Catholics attacking Lutherans, who were busy taking down Calvinists hard at work criticising the Church of England. Scribes and scholars have long felt the need to add, correct or amend, clashing with one another as they did so. The problem with margin notes is that they were untidy, often unruly and unorganised. And this made them unsuitable for printing. Richard Jugge, the Queen’s Printer, is thought to have introduced the footnote for the Bishop’s Bible in 1568. It was a convenience, a device to organise text and necessary commentary, to make it all presentable in print.[9]

By the following century, footnotes had started their evolution into a scholarly tool. Pierre Bayle, the son of a protestant pastor in Catholic France, fled to Holland in 1685, thanks to the Edict of Fontainebleau. From here, he had plans to write a new reference work, compiling all the errors made by other writers on a given subject, be that a well-known person, place or event. He was eventually persuaded that this was a mad idea – who would want to look up someone else’s errors? – and ended up writing a more conventional reference work, Projet d’un Dictionaire critique. But he wasn’t one to let a good idea go to waste. Far from abandoning the idea of presenting everyone else’s errors, he put them all in footnotes that took up more space than the text itself.[10] For instance, he dedicated nine pages to the Roman poet Virgil, which was 44 lines of text. To this he added 1144 lines of footnote commentary. And that doesn’t include the 109 margin notes revealing his sources.[11]

Although Bayle’s enthusiasm for footnotes feels excessive, it reflected a desire to present an honest account of history. Information and anecdotes had a place, even if some deemed them disturbing or wicked. In his entry on Caspar Schoppe, an early seventeenth-century German scholar, he told the story of when Schoppe, as a student, spotted a sparrow having sex twenty times in a row before dying. ‘O happy sparrow’, Schoppe reportedly said, reflecting on the joy and poetic end granted this bird, but not humankind. Catholic and Calvinist commentators found such naughty digression unacceptable, but Bayle – who had fled to Holland because similar authorities thought him and his protestant beliefs unacceptable – insisted that it was important. In telling their stories, historians usually distort the facts. He, on the other hand, had produced a work of ‘compilation’, and in such an endeavour, it was important to represent the ‘truth’.[12]

By the late eighteenth century, the footnote had evolved further, when the English parliamentarian and historian Edward Gibbon introduced a footnoting practice reflecting parliamentary debate and oratory. His main text represented an argument or narrative, his footnotes the objections, counter arguments and digressions.[13] But in stating certain facts, he would occasionally cleverly manipulate a reader’s feelings about the text. In his famous History of the Decline and Fall of the Roman Empire, for instance, Gibbon comes to the Roman Emperor Commodus. No animal or person was safe from the capricious Commodus and his taste for slaughter in the amphitheatre. Gibbon’s footnotes describe a menagerie of creatures dispatched for the gratification of the cruel emperor. An ostrich has a neck ‘three feet long, and composed of seventeen vertebrae’ – the footnote making clear that this was a rare creature, its slaughter all the more heinous. The giraffe is the ‘tallest’, ‘most gentle’ and ‘most useless’ quadruped. Defenceless, in other words. Commodus’s cruelty is amplified, thanks to this seemingly irrelevant digression into anatomy and zoology.[14]

Such subtle yet piercing criticism was accompanied by penis jokes (about, for instance, the sexual prowess of certain prophets, and their erect penises pointing towards heaven).[15] Such footnotes were designed ‘to amuse friends and enrage enemies’.[16] In digression after digression, footnotes helped Gibbon give a well-rounded, lavish and humane historical account. The bottom of the page became the place Gibbon could cut loose. He would freely give his opinions, tell jokes, bitch about people and indulge his prejudices. ‘To know Gibbon’s footnotes’, Chuck Zerby concludes, ‘is to know Gibbon the man’. But soon there would be little room in scholarship for this kind of whimsy or subtlety.

During the nineteenth century, certain scholars began to feel the need for a new, systematic way of doing history. In his History of Germany in the Reformation (1839), the historian Leopold von Ranke wrote that he sees:

the time is coming when we will base modern history no longer on second-hand reports, or even on contemporary historians, save where they had direct knowledge, and still less on works yet more distant from the period; but rather on eyewitness accounts and on the most genuine, the most immediate, sources.

Ranke was the founder of modern source-based and narrative history and he developed a footnoting practice in the spirit of the Scientific Method. In other words, he preached the importance of empiricism in historical research, accompanying an emphasis on primary sources and narrative.

Out went the colourful oratory and smutty jokes. In came the sober, detached, serious scholar: the professional historian, with their modern historiography. Ranke’s goal was to make scholarship visibly critical and not dependent on authority. Rigour was the order of the day, along with discipline, and method. In Ranke’s wake, historians now must examine all relevant sources and construct a new argument or narrative from them. They must also take into account the work of other scholars addressing related questions. Footnotes became part of the machinery of this basic historiography, used primarily for citing and referencing sources. If a scholar in the nineteenth century had expressed their prejudices and character in their footnotes as freely as Bayle or Gibbon, they might have been considered unprofessional.

Not all scholars, however, felt the need to show off their reading in footnotes. Some, like the philologist Jacob Bernays, a contemporary of Ranke, stuck all his notes into what he called his Giftschrank, or ‘poison cupboard’ – or, as we might call them, ‘endnotes’. On being criticised for this approach, Bernays wrote that having citations covering the lower half of his pages would ‘have taken on a really horrifying appearance of erudition’. Like many scholars today – particularly those writing for trade publication – he had his reader in mind. ‘I did not envisage a public’, he said, ‘with strong enough lungs to plow [sic] through twenty gatherings of that kind in one go’.[17]

Attitudes to footnotes are still transforming, and have been for a few decades, as scholars such as Grafton and Zerby praise the art of the footnote. And they rightly point out that footnotes are themselves of historical interest. It’s not only enriching, but also historically valuable to learn about cats urinating on medieval manuscripts, not least because it tells us about the inhabitants of medieval libraries, and their feline guardians keeping the nibbling mice at bay. And this is part of the joy of footnotes, according to its champions: they humanise text. They give the reader a chance to rest from wading through treacle-like scholarly prose. They are a window into the ‘inner workshop of scholars’, making room for bias and pedanticism. They even become spaces for thrilling scandals and a theatre, where scholarly egos clash. At least that’s one way of looking at them. We might take another view.

Noel Coward famously said that ‘having to read footnotes resembles having to go downstairs to answer the door while in the midst of making love’. Footnote fans effectively reply that the interruption might be OK, if the person at the door is a good conversationist. Grafton and Zerby both seem to expect that scholarly text will ordinarily be dry and thus celebrate each footnote interruption. Perhaps such an expectation is a consequence of Ranke’s disciplined, method-led scholar. But we should not forget how Walter Benjamin described his approach as ‘the strongest narcotic of the nineteenth century’.[18] As scholarly traditions and methods continue to evolve, surely these days there is already room for bias, pedanticism, scandals and theatre in the main text. Dryness should not be a condition of writing scholarly prose, and our congress with it should not need spicing up with a surprise guest.

[1] Thomas McFarland (1991). ‘Who was Benjamin Whichcote? or, The Myth of Annotation’, in Annotation and Its Texts, ed. Stephen A. Barney, Oxford University Press, p. 164.